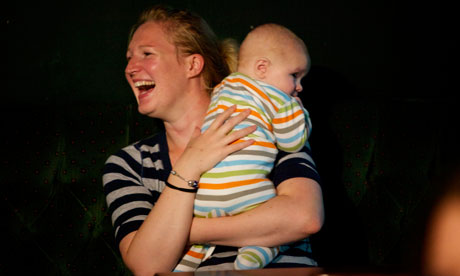 It is lunchtime in the back room of a pub in Sheffield, and a group of new mothers has gathered. Some are breastfeeding, some are wrestling with muslin cloths, some are brandishing bottles. They all look exhausted, but happy to be among their own kind. But this is not an NCT coffee morning. It is a comedy club.

Some of the mums are having a glass of wine (and only giggling slightly hysterically about the fact). A few of the babies are shaking tambourines and rattles, left out to help them heckle.

I first heard about mother and baby daytime comedy a couple of years ago.
For a long time I couldn’t track down any events and decided it must be an urban myth. After all, who would do something so mad? Perform standup in the middle of the day for a load of breastfeeding mothers? Why would you do that? Then I interviewed Jo Brand, who said she had heard of it too
and it was supposed to be very good.

Women’s presence on the comedy scene is getting a real boost at the moment. This week saw the final of Funny Women, one of two competitions for female comic talent that attracted hundreds of entries this year (the other is Funny’s Funny), while Laughing Cows has hosted only-women-on-the-bill comedy nights since 1998.

There have been a few attempts to get mother-and-baby comedy going, but Helen Rutter’s Gas and Air at the Greystones in Sheffield is perhaps the most successful. It first launched at The Bedford, a comedy venue in Balham, south London, last year. Since then Rutter has moved to Sheffield and taken the show with her. An actor who has appeared in Wire in the Blood and Holby City, she is the mother of three-year-old Lenny and currently eight months pregnant. Rutter performs a one-hour show that includes sketches of hilarious characters horribly, painfully familiar to new mothers: the children’s singing teacher, Melody of Melody’s Melodies, who makes you sing If You’re Happy and You Know It, Clap Your Hands (mothers will all have been to that hideous class), a demented health visitor, the competitive new mum friend. She does a brilliant impression of a drug-pusher offering orthodontic dummies.

“Mums are so desperate for something that is not singing nursery rhymes,” she says, “so there’s not much competition.” It’s not unusual for her to play to crowds of 50 or more women – each with a baby in tow. “Babies under one are welcomed with open arms as long as they can’t move much and don’t mind a bit of fruity language.” They are not an easy crowd. It can be offputting, Rutter admits. “When they’re quiet, they’re all quiet. But when one goes… They all go. If you’re a comic who has done Saturday nights at Jongleurs with all the hen nights and stag nights, though, it’s not much different.”

The babies scream, gurgle and vomit at regular intervals and many of the mothers look permanently glazed over. But at times it is like proper comedy: awed, hushed silences punctuated by a killer punchline. Most of the audience had walked in looking dazed, sleep-deprived and slightly unhinged. They walk out giggling and with a spring in their step.

Rutter’s intentions are not purely comedic, though. She feels that what she is offering is almost like a social service. She had an email from one audience member saying: “Thank you so much. I really needed that. I was so down.”

The idea for the show – which originally she performed in London as a duo with her friend, actor Natasha Joseph – came from a dream Rutter had, shortly after giving birth, that she was performing to an audience of babies. She wanted to design a show to support and reassure new mothers “at a time when your emotions are all over the place and you can feel extremely vulnerable”.

This project is extreme: few comedians would put themselves up in front
of such an audience. But elsewhere parenting is becoming something of a theme in comedy. It used to be that comedians would hardly ever reference the fact that they had children. Comedian Lucy Porter, pregnant with her second child, explains: “I try not to do too much parenting material at normal gigs because generally standup crowds are fairly young and child-free.
A lot of them have come out for a drink and a laugh and they might even fancy their chances of pulling at the end of the night. Meanwhile I am up on stage like the Ghost of Christmas Future reminding them of the consequences of having fun.”

Now Porter is launching Screaming with Laughter, a monthly daytime comedy show where parents and babies will be welcome. It’s based on the “Baby Scream” cinema idea, where you can take newborns to special screenings. “It will be nice to do shows to parents because obviously having a child and being pregnant has been the main focus of my life for the past two years.”

The success of the TV series Outnumbered has shown that there is a mainstream market for jokes about family life. Now, acts as different as Michael McIntyre and Stewart Lee reference their experiences with their children.

McIntyre has his joke about his children screaming “juice” in north London (It sounds like “Jews”). Lee finished his show 41st Best StandUp Ever by balancing his son’s toy giraffe on his head. At this year’s Edinburgh festival Emily Watson Howes’ The Baby Diary – about a man blogging about his wife’s pregnancy – was named “show most likely to end up on TV”.

Ria Lina, a standup, known as “the Filipino Sarah Silverman”, and mother of four, says there is an appetite among audiences for jokes about motherhood – as long as they are funny and not whimsical. “If you say, ‘My kid said this and it was really cute,’ that is not going to work. My comedy is about my reaction to my children. Because I’m Filipino, I like to say that I didn’t work nine months to make a kid everyone thinks I’m the nanny of.”

Lina enjoys talking about being a mother on stage because you can overturn expectations more easily. “You have an advantage as a woman: there’s more scope for comedy because it’s edgier. Society accepts that the father is one step removed, so if a dad says: “My teenager is a twat,” we expect it.
If a mother says it, it’s funnier. Because my eldest child is my step-child I can make a joke about hitting on him to get him to pull his trousers up. A stepfather with a stepdaughter would never be able to make that joke. It doesn’t have the same impact.”

She says being a parent has made her a better comedian too. “I didn’t have as much to say before I had children. Becoming a parent gets rid of the “please like me” factor and frees you up. At the end of the day you don’t give a crap any more as a parent. If someone heckles you, you think, ‘Screw you, I’ve fed a person from my body.'”